5 most extraordinary temples in Bali that you absolutely must visit! 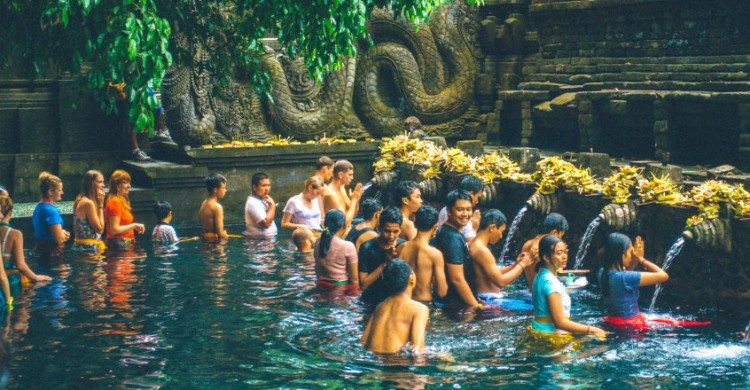 Going to the paradise island of the Gods, you want to make friends not only with the ocean and the numerous beaches of Bali, but of course, if you do not plunge headlong into the culture of the island, then at least slightly open the secret curtain into the world of the island's unusually expressive sights.

In this article Bemorepanda will tell you just about one of the components of Bali's culture - the most significant, and at the same time popular (due to their unusualness) temples of the island.

You don't have to be religious or get carried away with cultural attractions to definitely want to see, for example, a tiny temple with monkeys on a huge sheer cliff above a raging ocean, or an incredibly graceful temple-pagoda in a sacred mountain lake.

In general, each of the Balinese temples described in the article, in our opinion, deserves a visit, but if you are limited in time, then Bemorepanda hopes this article will help you make the best choice in favor of 1-2 of the most interesting places in Bali for you.

A map with all the temples and other attractions of the island is at the end of the article! 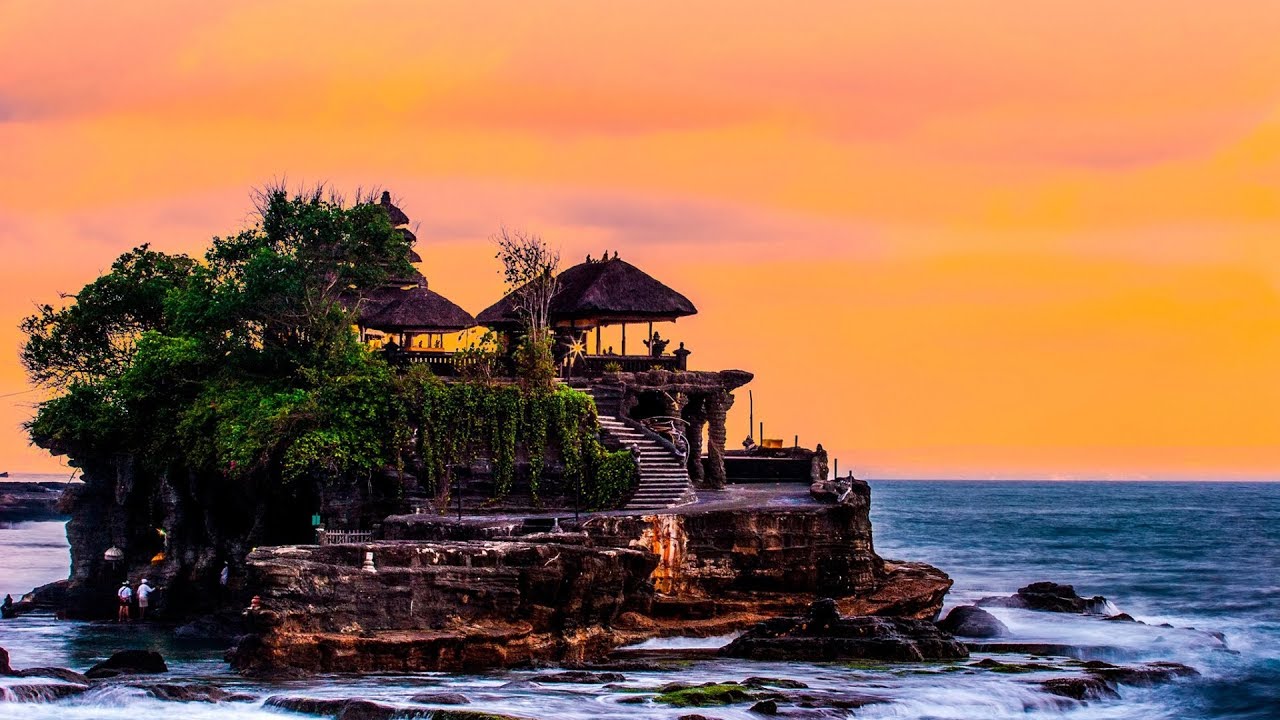 Judging by the number of postcards, the Pura Tanah Lot is perhaps the most famous temple in Bali. A remarkable feature of the Tanah Lot temple is that you can approach it only at low tide, at other times the ocean separates the temple from the land.

The fact that Pura Tanah Lot stands on a cliff 100 meters from the shore does not mean at all that it is not worth going here at high tide, on the contrary, it seemed to me that this way the views from the shore to the temple in the raging waves only benefit, all the more inward anyway you can't go in, just climb a couple of steps and peep slightly.

A sacred snake lives in the rock next to the temple, which you can see for a donation. 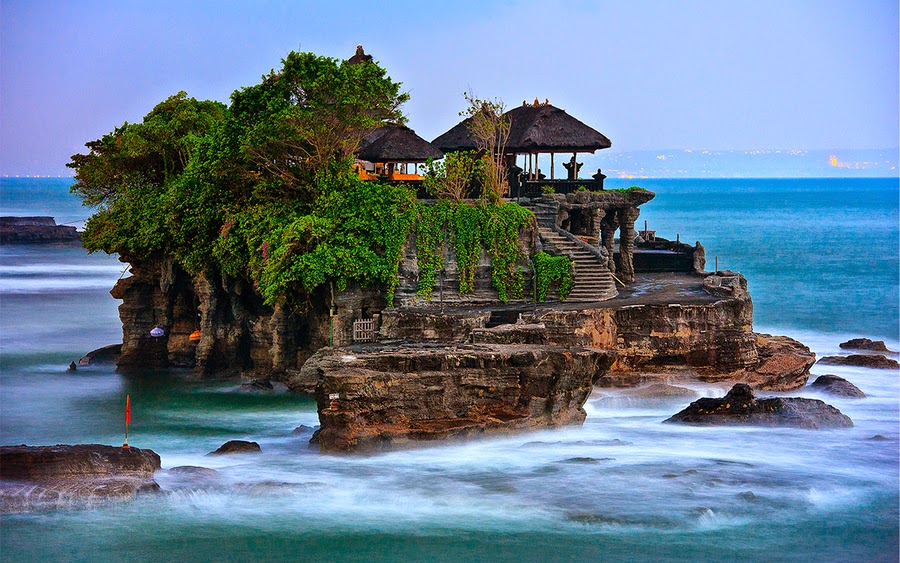 In addition to the main temple on a rock-island, in the Tanah Lot complex there are other small graceful temples on the cliffs, to which (regardless of the water level in the ocean) you can walk along the narrow edge of the cliff, right a meter from the cliff, and it will take your breath away! I don't think it's even worth talking about what cool pictures you can take there.

The bulk of tourists come to Tanakh Lot at sunset, firstly, the temple looks most advantageous in sunset colors, and secondly, dance performances begin immediately after sunset, although their schedule is constantly changing, here you will get to, but in any case, in my opinion each of the Balinese dances deserves attention.

In the morning and in the afternoon, it is also no less interesting, for example, on the left to the temple complex there is a hotel, on the territory of which there is a beautiful green golf course. You can also walk to the field from the temple, here is a small deserted beach, and even extreme surfers find this place interesting. 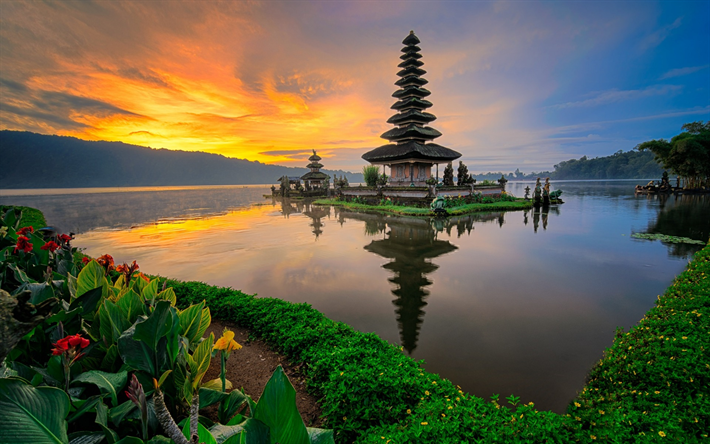 In the mountainous region of the island, on Lake Bratan (Beratan) there is a small, surprisingly harmoniously blending into the water landscape, the Pura Ulun Danu pagoda-temple.

The goddess of fertility Devi Danu "dwells" in this temple, so the temple is popular not only among tourists, but also an important place of pilgrimage for local residents, because according to legend, if you appease the goddess with generous offerings, then the harvest will be generous.

In addition to the multi-tiered pagoda on the water, there are other temple buildings with courtyards on the territory of the Pura Ulun Danu complex, which you can look into. There are also a couple of flower paths along the lake and a small green park for walking with benches and statues. 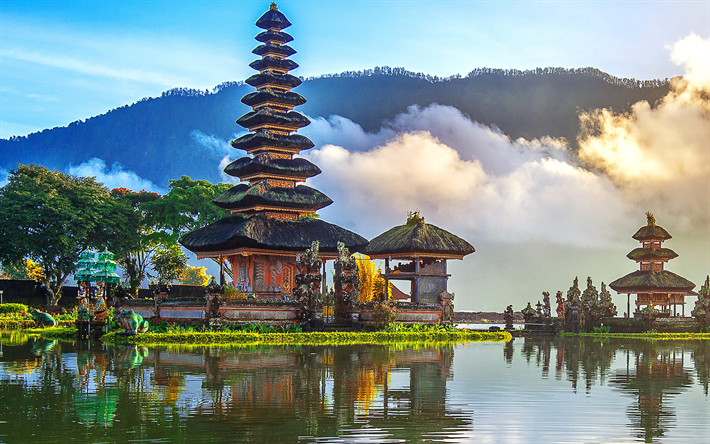 In general, this place is very picturesque, and if you really want to feel the atmosphere, admire the lake, temple and mountains, then it is better to come early in the morning or by sunset. Although, on the other hand, despite the crowds on weekends and festive ceremonies, on the territory of the Ulun Danu temple there is an opportunity to see beautiful girls dancing Balinese dances and musicians playing in the temple on a traditional gamelan instrument, and simply smart tourists.

A trip to this temple can be very successfully combined with a visit to rice terraces, strawberry farms, Git-Git waterfall, botanical garden and lakes Bratan, Buyan and Tamblingan. 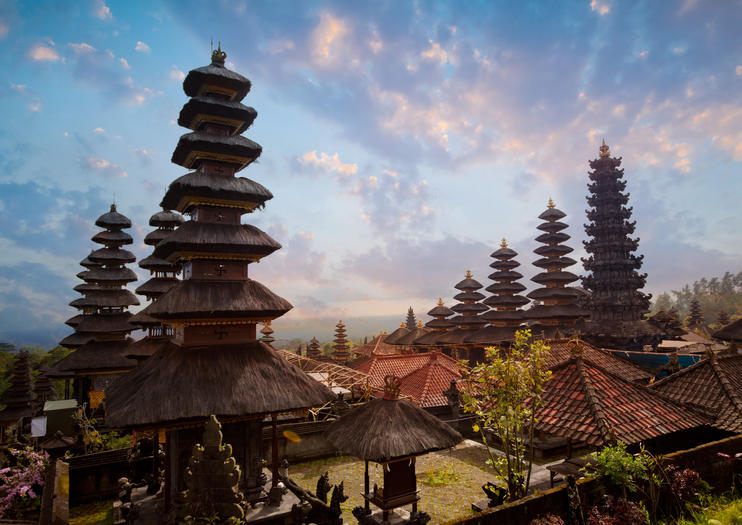 "The mother of all temples" - that's exactly what the Balinese call Pura Besakih, because this is the main temple of the island, and it is amazing because it is located on the slope of the Agung volcano - the highest mountain in Bali, at about 1 km above sea level.

The mountains in Bali are considered sacred, because according to the most ancient belief, the gods live on them, by the way, the Besakih temple is more than 1000 years old. If you want to see no, not gods, but a stunning view of the mountains around, as well as the ocean, our advice to you is to come in the morning. By lunchtime, here most often, like over all the mountains, clouds are gathering, for the first time we did not take this moment into account and got into a rainy haze ((Pura Besakih, Bali 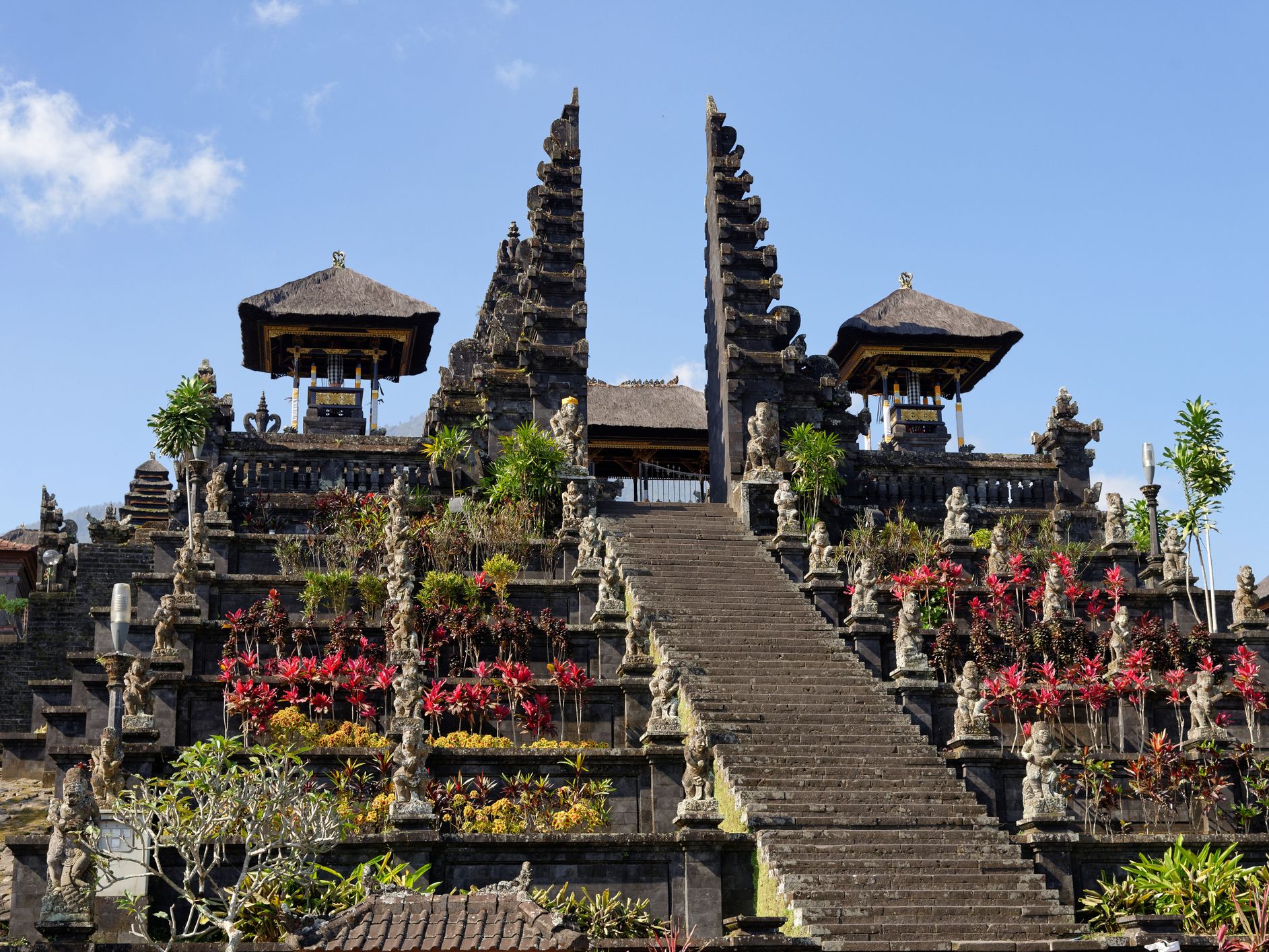 On the days of ceremonies, it is quite crowded here, which, on the one hand, slightly violates the idyll of these places, and on the other, allows you to see the Besakih temple, with its altars and statues in beautiful bright sarongs, as well as a hundred other local Balinese with offerings, if you wish, you can even join to their unusual ceremonies for us. 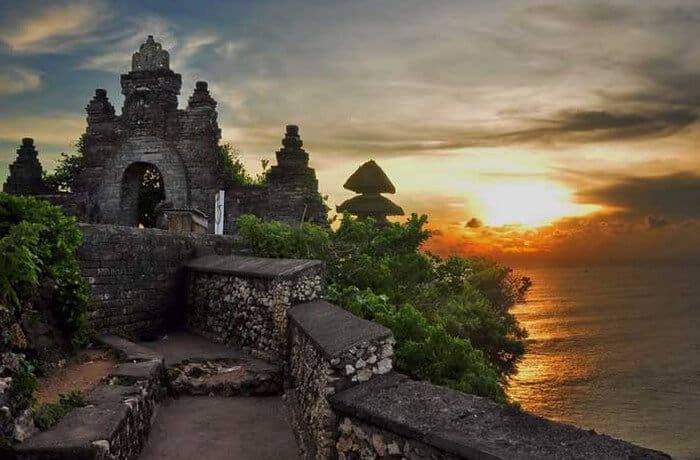 The Pura Luhur Uluwatu temple itself is not of particular interest, moreover, every time we were there, the doors to the inner courtyard of the temple were closed, it is very small and is opened only on special occasions.

It is the territory itself that is of interest, from the walking paths of which views of the mighty and endless ocean open.

And the unusual feature of the Uluwatu temple is that it stands on the edge of a huge rock, and 90 meters down the waves of the raging ocean break just on this rock, in general, the place is incredibly picturesque. 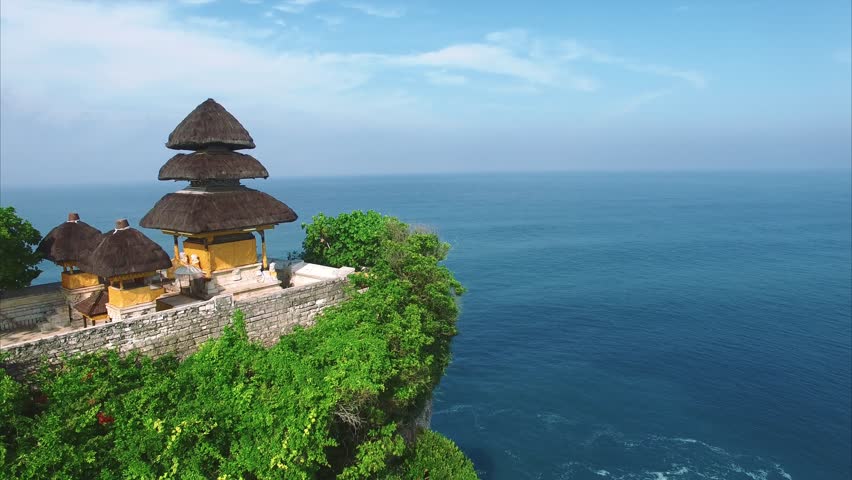 If you like to get aesthetic pleasure from contemplating nature or are fond of photography, then come here to meet the sunset - the sun sets in the sea, and the black silhouette of the rock and the Pura Luhur Uluwatu temple against the background of a multi-colored glow spreading across the sky is something unimaginable.

After sunset, here, on the territory of the complex, they arrange a national performance - Kecak, the language does not dare to call it just one of the Balinese dances, the spectacle is spectacular - on a round stage, under cover of night and under mesmerizing cries, elegant, in sarongs and bright makeup, the artists introduce auditorium in a kind of trance.

We also want to note that the entire territory of Pura Luhur Uluwatu is occupied by the ubiquitous monkeys. Someone will enjoy watching these funny creatures, but you should be on the alert, seemingly kind creatures can easily take away glasses, a cap or a phone.

There is practically no shade on the territory, so my advice to you: come either early in the morning, because in the afternoon it was scorching heat, sometimes unbearable, or closer to sunset. 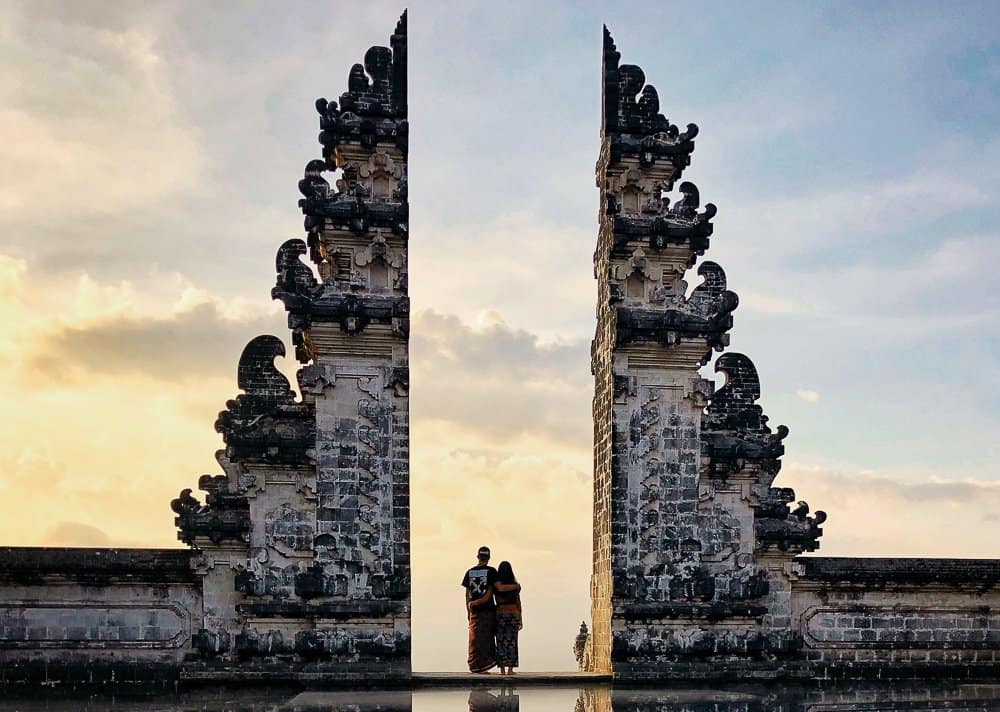 Pura Lempuyang is a whole complex of temples, all the components form like a staircase to heaven, each subsequent temple is located on a hill above. A hiking trail of 1,700 steps winding through the jungle leads to the top; the ascent takes about 4-5 hours. 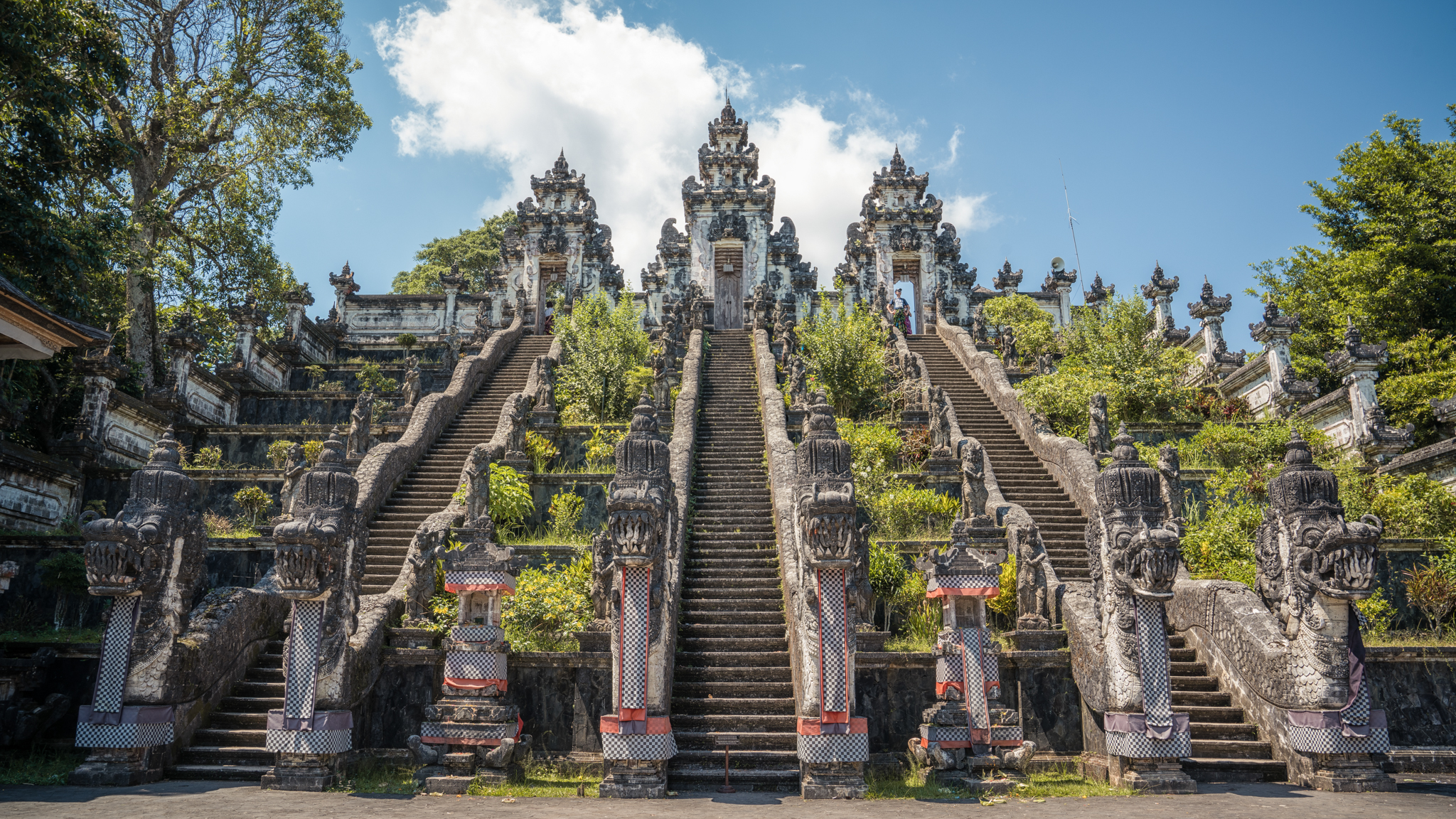 In general, trekking to the very top of the Lempuyang temple is probably not for everyone, but it is worth coming here anyway, because, even if you do not climb to the very top, already through the gates of the lowest temple, if you are lucky with clear weather, the view is simply fantastic - to the Agung volcano.

It is better to come in the morning to see everything at its best. Well, and of course, the morning arrival may well become an aid to go to "conquer" the rest of the temples, at this time the sun is not so terrible, and the reward will be not only a feeling of completeness and awareness of one's capabilities, but also an amazing atmosphere along the way, and especially on the very top.

One of our acquaintances said that the gazebo in the upper Lempuyang temple is one of the most amazing places where he had to meditate. If you are on this wave, then you are definitely there. If not, enjoy the view from the lower temple and head to the Tirta Ganga water palace, which is just around the corner!

We would not call this place a tourist, but the fact that the temple does not greatly attract tourists, rather speaks of its inaccessibility, rather than uninteresting))

They say that there are more temples on the island than houses, and this can be easily believed, here even the smallest village has at least 3 temples:

There are even more temples in large towns and villages. In each of them, it is quite easy to get to some kind of ceremony or ceremony.