Can't bear to eat alone? - one restaurant in Thailand is using stuffed pandas in order to respect the social distancing rules 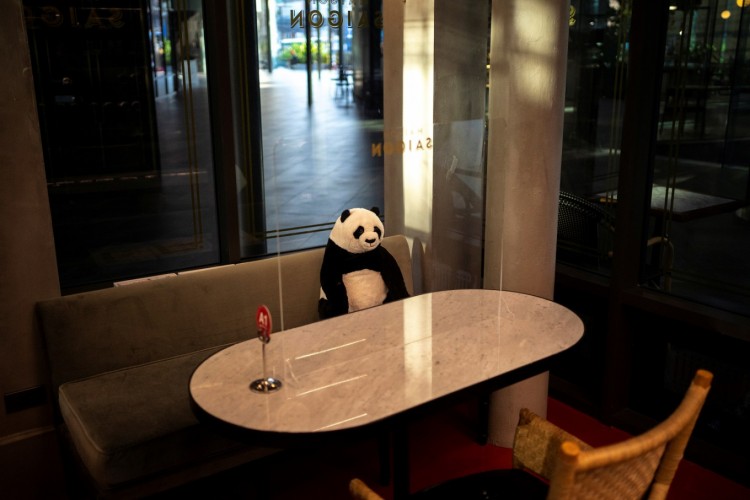 In Thailand, one restaurant want's to meets new social distancing guidelines by providing lonely diners a bit of company - by seating stuffed pandas at its tables.

Thailand has relaxed some restrictions on businesses as the number of coronavirus cases slowed, allowing restaurants to reopen but with strict rules in place to reduce the risk of the virus spreading.

"Earlier we had only one chair for the tables where the customer came alone. But for me, it felt strange, so I thought I'd give them some company," said Natthwut Rodchanapanthkul, the owner of Maison Saigon, a Vietnamese restaurant in Bangkok.

Sitting opposite one of the panda dolls, diner Sawit Chaiphuek said he was happy to have some company as he stepped out to eat for the first time in months.

Another customer says that "The doll makes me feel less lonely eating by myself," mentioned Sawit, 25.

Siriporn Assavakarint, another customer, said the new seating rules often gives diners a headache, and the army of plush pandas made things much clearer.

"It's a lot easier to understand compared to other restaurants where people always get confused about where to sit and end up sitting too close to each other."

Thailand reported just one new coronavirus case on Thursday and no new deaths, bringing the total to 3,018 cases and 56 deaths since the outbreak started in January.

The day before, it reported zero new cases for the first time since early March, before the lockdown began.

How social distancing in restaurants is provided in different countries 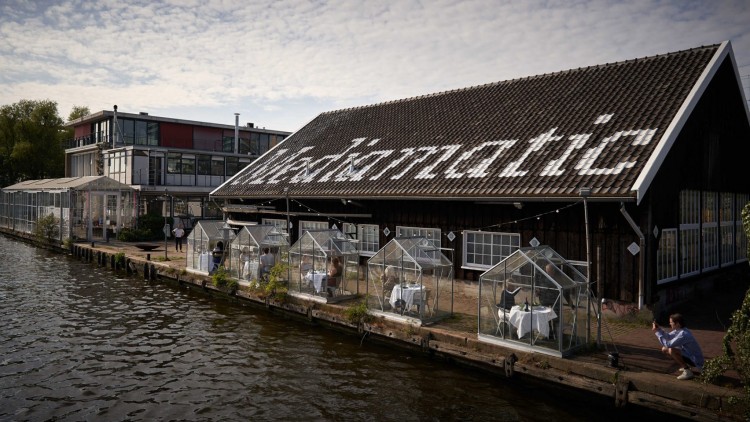 Along with masks, social distance has become a real sign of the time of the pandemic, which changed the face of cities; especially in the recently opened restaurants.

Coronavirus forced to make social interaction more organized: to reduce the risk of infection, people should maintain a distance of one and a half to two meters.

The restaurant owners all around the world have new problems: in the opened establishments, you need to force guests to stay away from each other.  Restaurateurs invent the most exotic ways. There are places where you will be put in a greenhouse or forced to dine in the company of an inflatable doll in a wig. 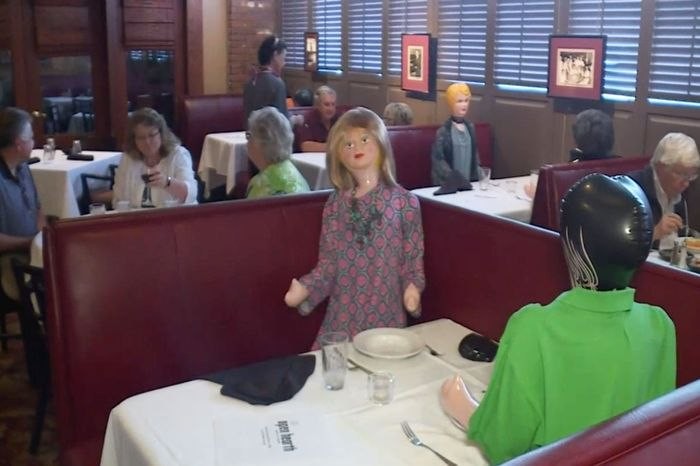 Restaurants have already opened in Germany, but visitors are required to maintain a social distance of 1.5 m. In Schwerin, the owners of one of the institutions found an original solution to the problem: guests are given special hats. 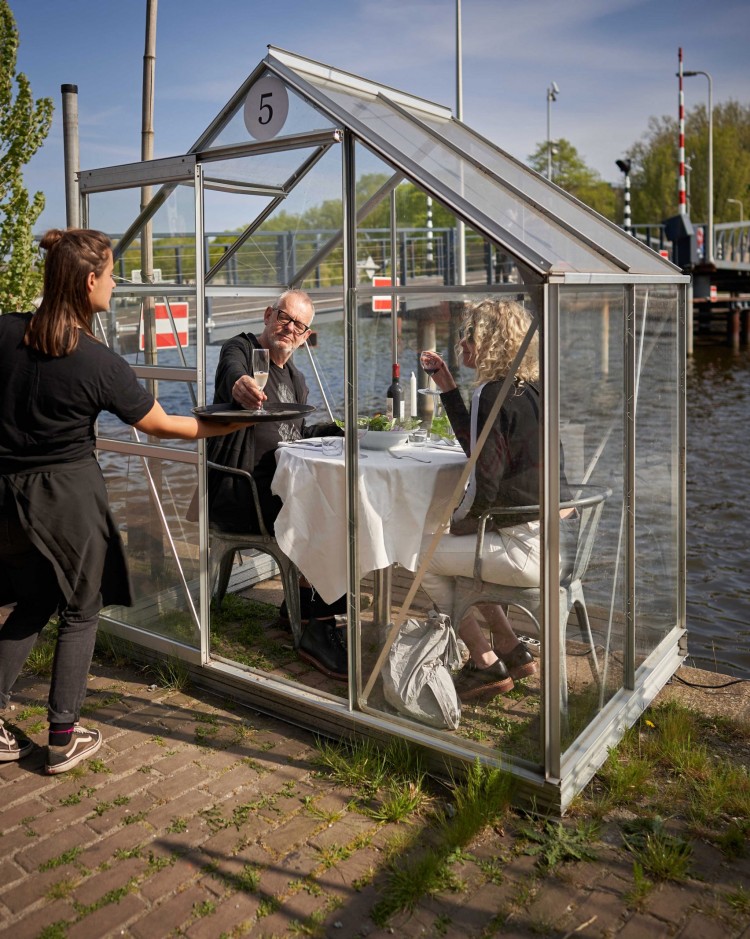 Foam "blades" do not allow people to approach each other closer than the distance established by law.  Customers note that this, of course, is not too comfortable, but they are glad of the opportunity to have lunch again in the restaurant. 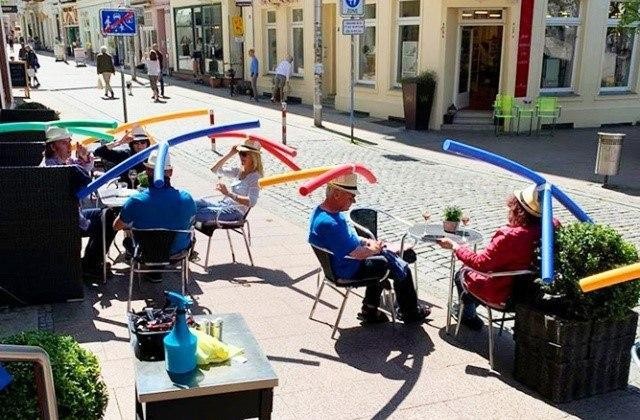 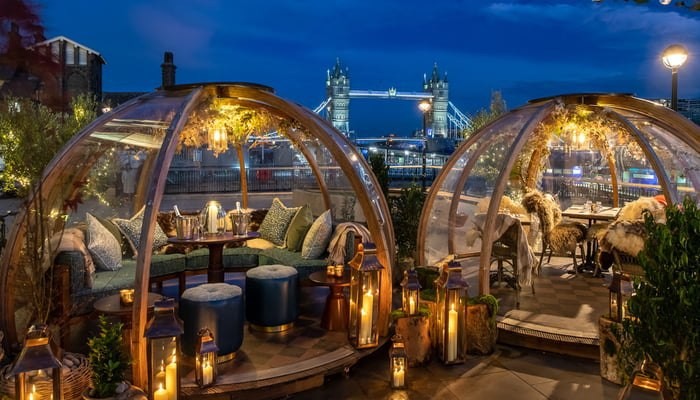 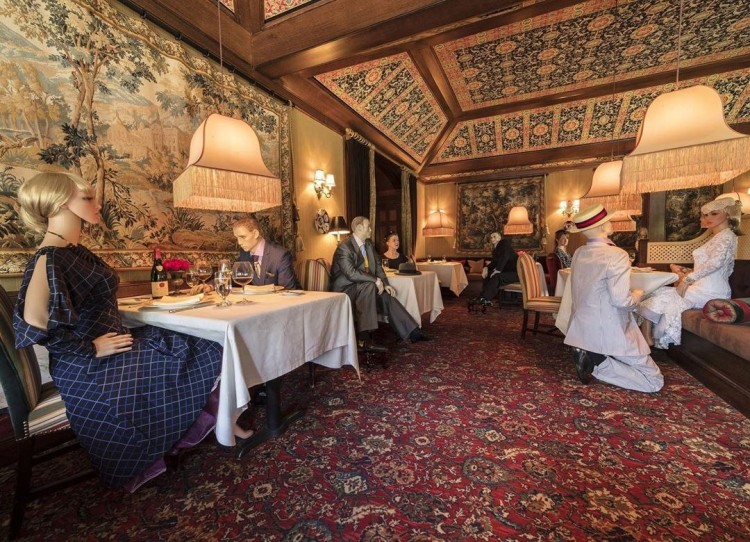 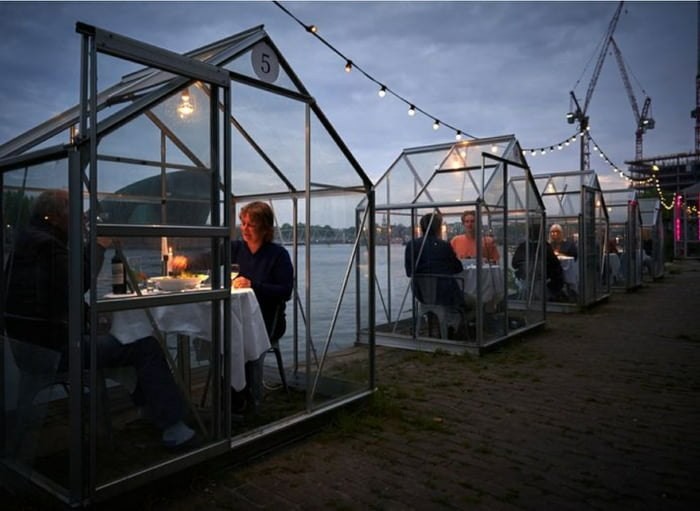 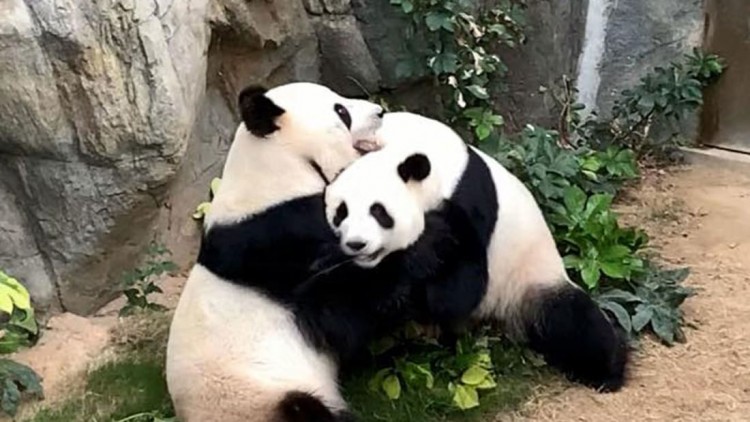 The king of Thailand is safe! He is now in Alpine hotel with 20 women to protect against coronavirus 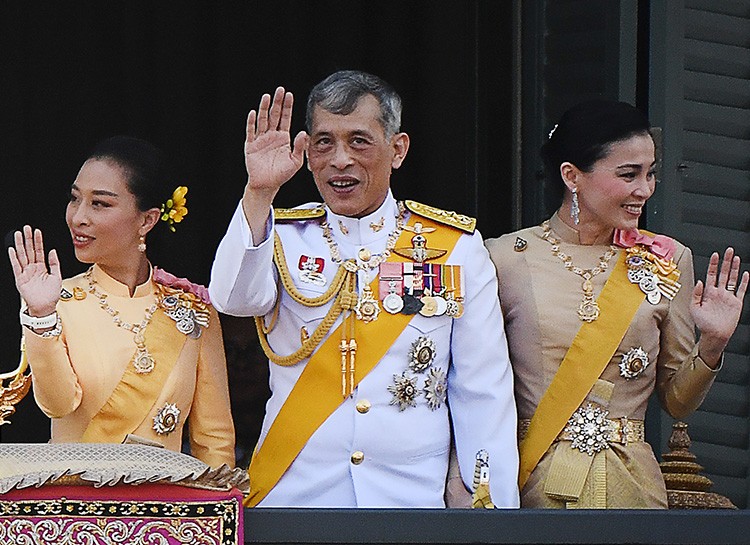 King of Thailand Maha Vajiralongkorn escaped from coronavirus to Germany to isolate himself at the luxurious Grand Hotel Sonnenbichl in the alpine resort town of Garmisch-Partenkirchen in Bavaria with his retinue.

According to the German tabloid Bild, the hotel was fully booked under the king, as The retinue of the 67-year-old monarch includes a harem of 20 concubines, as well as numerous servants. However, it is unclear whether his four wives live in the hotel.

According to the German press, guest houses and hotels in Bavaria were previously closed by the authorities to ensure quarantine because of the coronavirus, but the local district council made an exception for the Thai monarch, justifying this by saying that “the guests of this hotel are a single and homogeneous group of people without any unauthorized visitors. ” 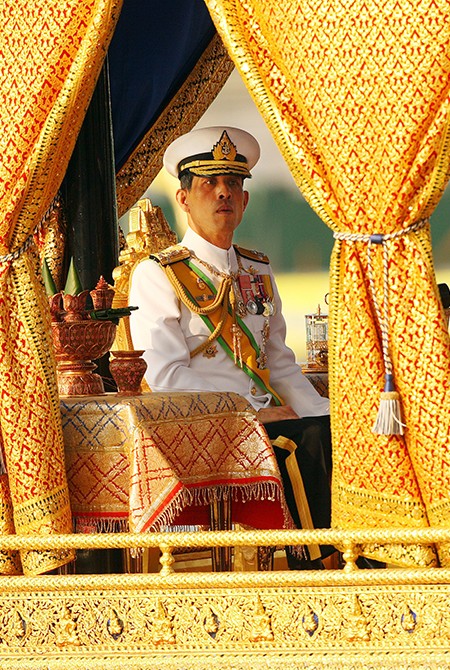 However, 119 members of the monarch group were deported back to Thailand due to suspected coronavirus - they showed symptoms of respiratory diseases upon arrival in Germany.

The news of Vajiralongkorn’s escape to a luxury hotel across the world was met with great indignation in Thailand: tens of thousands of Thais, at the risk of breaking the country's law on the untouchability of the monarch, wondered — why do they need such a king? Thai hashtag, which translates as "why do we need a king?" Tweeted 1.2 million reposts per day on Twitter.

At the same time, we recall that in Thailand, anyone who insults or criticizes a monarch can be imprisoned for up to 15 years. Nevertheless, this act rallied society against Vajiralongkorn: it is quite possible that the coronavirus will become the trigger for the deposition of the Thai monarchy ...

Earlier, Turprom wrote that the richest man in the world - Jeff Bezos, took refuge in the bunker of the apocalypse, fleeing the coronavirus.

The Thai Ministry of Public Health announced on Saturday 141 new cases in the country, bringing the total number of infections to 1,410.

The precautionary measures taken by the king for his own safety, however, where not accepted by the citizens of his country. Thousands of Thais sharply criticized the king on social networks, although in Thailand this is prohibited by law. Anyone who insults or criticizes the monarchy may face imprisonment of up to 15 years.

This is what a romantic Turkish dinner looks like, in a capsule! Steakhouses have adapted 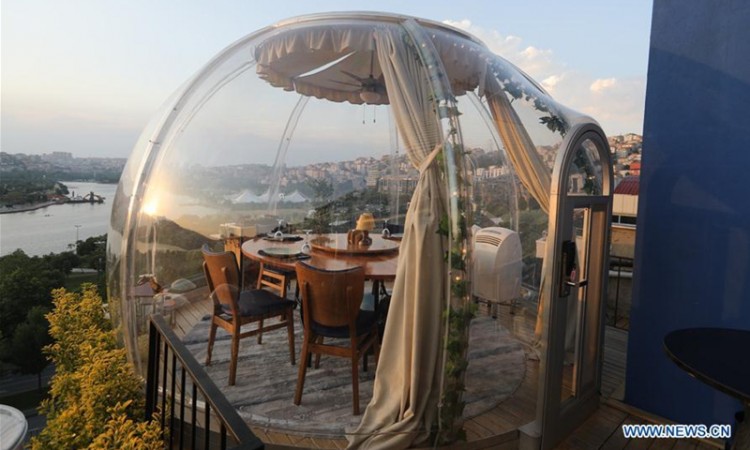 In the Turkish restaurants in Ankara, Istanbul and Bursa, every meal on the terrace is packaged in a plastic capsule.

Customers are disinfected with Turkish cologne, which contains more than 70% ethanol, to kill the virus that has killed 4,861 people in Turkey since March. 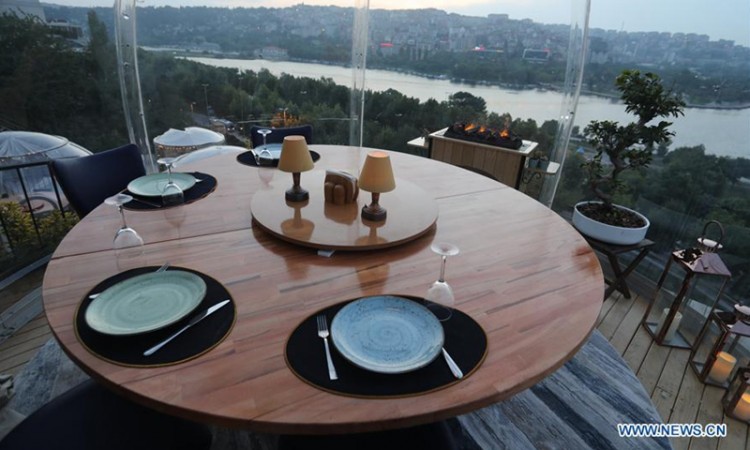 The first restaurants of this kind open in the coming weeks in Istanbul, Ankara and Bursa, with the start of the summer season. 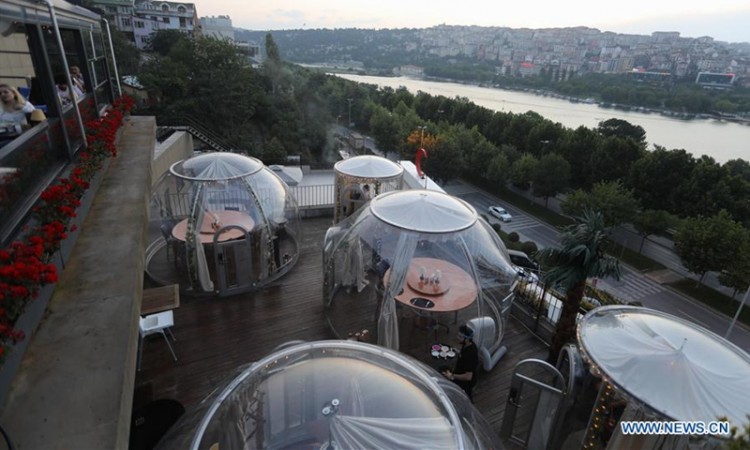 Each capsule is disinfected with ozone or ultraviolet lamps. 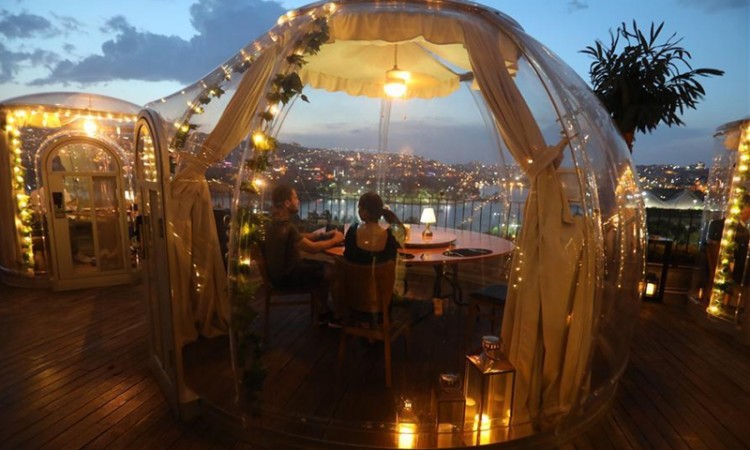 The capsules were imposed by Ankara authorities after the number of infections increased after the restrictions were lifted and people were allowed in parks, restaurants, gyms and barbershops.

Old photo of people eating in a busy restaurant - year 2019 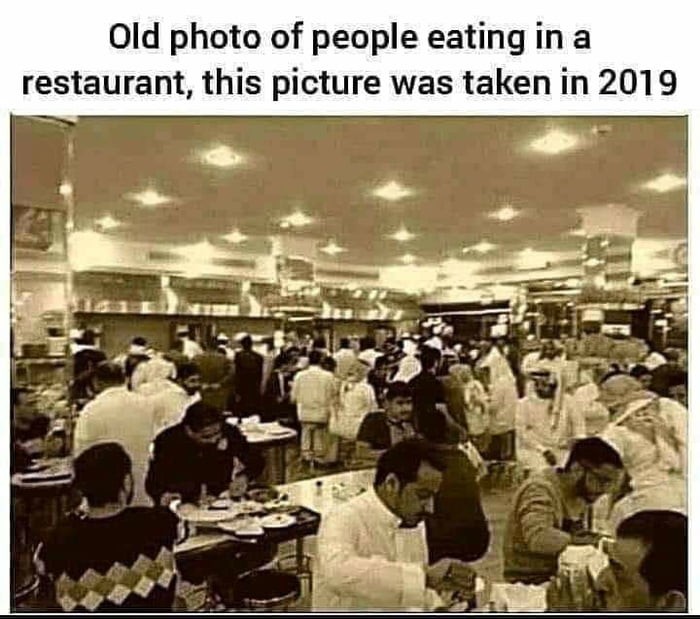